How to Do a Release of Lien? Common Mistakes - Webinar

How do you actually file a lien release? Learn this, what a lien waiver form looks like, how to preserve claims like change orders, and why to negotiate the form of release at the time of contract.

There are a few pitfalls to avoid when exchanging releases for payment. You should understand the legal significance of a lien release, how you are probably releasing rights far in excess of your lien rights, what happens if you do not negotiate the form of release at the time of contract, what happens if you have the wrong through date or now through date, a look at a sample lien waiver form, how to preserve other claims with you sign a release like delays or unexpected change orders, and what happens when you don’t use conditional release language or do not create exceptions to the release.

This article was taken from a webinar presented by SunRay Construction Solutions and Alex Barthet. Alex is a board-certified construction lawyer who serves clients in Florida. We will discuss the pitfalls to avoid when exchanging releases for payment. We will also address the following questions and points:

Understanding the legal significance of a lien release

Pitfall #1: Not negotiating the form of release at the time of contract

Pitfall #4: Not creating exceptions to the release

Understanding the Legal Significance of a Lien Release

Now we will talk about what a lien release is and why it is legally significant.

1. What does a lien release do?

The first thing you have to understand about a lien release is that it is a document that will release certain rights. Most of the time they are just lien rights, but depending on the document itself it could be more than just that.

2. Why is a lien release important?

Typically, through a period of time when a dispute happens, one of the first things we do is look at the releases and the reason is because your attorney can line up the releases. They can extinguish certain claims through the date of those releases.

So, it is really important that you understand what the release is doing when you are exchanging it for payment. Because you do not want to give up more rights than you are expecting for the check that you are receiving.

In construction, almost every release is called a lien release or a lien waiver. Depending on the language of the document, you may be releasing rights far in excess of just your lien rights. So, you have seen or have to sign one of these releases that is the better part of a page and has a lot of fine print.

You are probably releasing rights far in excess of your lien rights. It probably says that you are releasing any claims for change orders, delays, impacts, and costs. This may not be a problem so long as you do not have those claims. But if you think that you have those claims and you wish to assert them later when you sign a release that releases those rights, then you are giving those away.

For example, there is a contractor making partial payments to a subcontractor. The terms of the release that the subcontractor was signing every month was the broad form release. So, while the document itself was titled lien release, it was very broad.

4. Your perspective should be different when you are giving vs. getting a release

Pitfall #1: Not Negotiating the Form of Release at the Time of Contract

Now we will talk about pitfall number one, which is not negotiating the form of release.

1. What form of release is required by Florida law?

Florida Statute has a form of release and that release is very basic. The law says that no one can make you sign a release form other than the one in the statute.

2. But my contract says I need to use a specific form

However, what it is important to know is that if you sign a contract and that contract says that you will use the form of release prescribed by the owner or contractor, or the sample form that you are going to use as part of the contract.

That is the form you have to use. Therefore, when you are negotiating and reviewing your contract, do not just skip over the exhibits. You need to look at all of them and make sure that the release you are agreeing to provide every month is consistent with the release that you are willing to give.

So again, if your contract requires a specific form, that is the form you have to use. So, you need to negotiate that at the time of contract.

3. My contract is silent on the issue but the contractor demands I use his form. What do I do?

What if your contract is silent on the issue but the contractor demands that you use his form? This is called the Golden Rule which means, he who has the gold makes the rules. So here, you have to make a business decision. Unfortunately, whether or not you are going to give up rights in order to get a check, is not that the contractor has the right to demand the release other than the statutory form.

Now we will talk about pitfall number two, which is having the wrong through date or no through date.

This release says that it is effective for the materials furnished through, and it has a date.

1. Why is the through date important?

So, the effective date of this release is the one that is inserted there. You want to make sure that the through date on the release matches the amount of money that you are expecting. This release has a spot where you can put in the amount.

2. Does the through date match the dollar amount?

So, you want to make sure that if you are expecting a check for $25,000 that the date you are putting as the through date in the release is the equivalent of the check that you are receiving.

3. What if there is no through date?

If there is no through date in the release, then the release legally speaking, is effective as of the date that you sign it.

That means that if you are expecting a check for the work through the end of December, you sign the release today and it has no through date, the legal impact of that document is that it is a release as of today. So, you have to be very careful about that.

But if they had read the document carefully, they would have seen the words “through date” and the date that matched the amount of money they were expecting. But legally, it was not the same.

The third pitfall is not using conditional language.

Learn more: Boo! Scary Lien Waivers and How to Avoid them (And Still Get Paid)

1. What is conditional release?

So, if you are giving a release before you are actually receiving payment for a check, you should use conditional language in your release.

2. Avoid the use of $10 and always state the amount to be received

It is also important that when you use conditional language you do not use the normal recitation of consideration of $10. You should use the amount that you are actually expecting to receive. So, if you are giving a release in exchange for $25,000 then the release should say $25,000. It should not say $10 because obviously the condition is not receipt of $10, it is receipt of $25,000.

3. But I kept the original. Isn’t that enough?

One thing heard a lot is whether or not keeping the original is enough. The short answer is no. The fact that you have an original and someone else has a copy that is in fact a true copy. So it is not a forgery, it is the real thing, but just a copy. You will have no leverage because you are holding the original. Sometimes people want the originals but legally speaking, a copy is as good as the original.

To give you an example of how significant that is, when attorneys handle recording for certain clients. The attorney will never get an original because all of their recording with the clerk and in the court is done electronically. So, clients will sign documents, notarize them, scan them, and send them back. The attorney will never get a piece of paper and they will have recorded with the clerk and filed with the court.

Pitfall #4: Not Creating Exceptions to the Release

Pitfall number four is not creating exceptions to the release.

1. How do I preserve other claims when I sign a release, like delays or unexpected change orders?

If you have other claims that you know exist, the two most common ones that we see all the time are claims for delay or claims for unexecuted or not fully approved change orders. Keep in mind that if you sign a release and that release has broader language than the standard form that is in the statute, which again are broader than most releases that people sign or are in the statute.

So, the question now is how do you preserve it?

Notwithstanding the foregoing, this waiver and release specifically excludes _____ which is reserved by the undersigned.

Above is another sentence you can use and add to your document. You can handwrite it; you can make a stamp. In the blank is where you are going to put in certain invoice numbers, a delay claim based on a description, maybe you submitted a change order, maybe you have a list of RCOs or potential change orders (PCOs), or unexecuted change orders that you are waiting for approval on. You would list those there so that you can preserve them there for the future.

2. Do I have to do it month after month?

3. But they won’t accept modified releases?

What about Priority? – The Visible Commencement Standard in Tennessee - Webinar 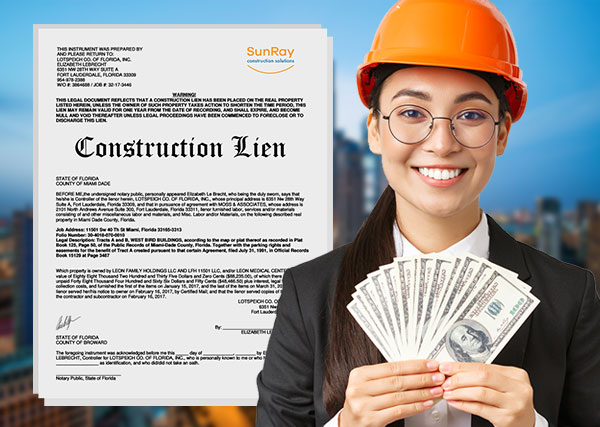 Recording a lien does not mean you will get paid! How to deal with breach of contract, unjust enrichment, Notice of Contest of Lien, and how the Notice of Commencement affects lien deadline. 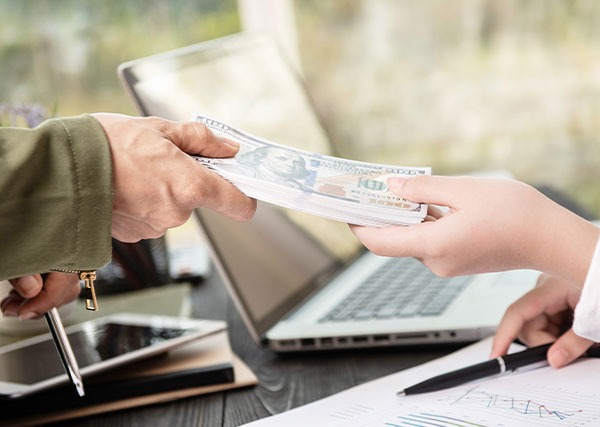 Doing collections the right way is important. You should know about payment terms, why you should accept partial payments, what a credit application is, and Claim of Lien deadlines. 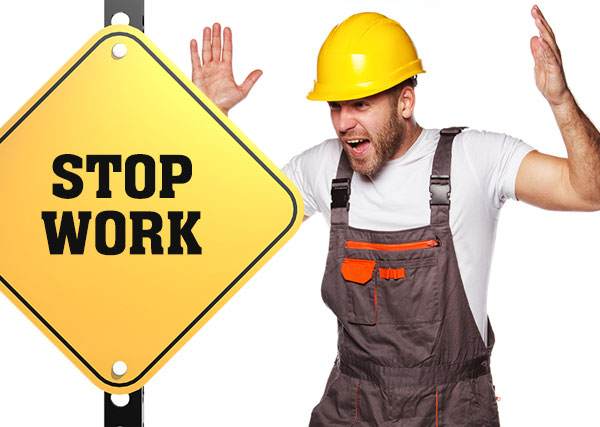 Webinar | SunRay Construction Solutions
How to Stop Work If You Are Not Getting Paid (It Is Not What You Think!) - Webinar

Safely stop work by learning how to secure your claim of lien right by putting a lien on property. Also understand why to serve a Notice to Owner and what to do if you provide a performance bond. 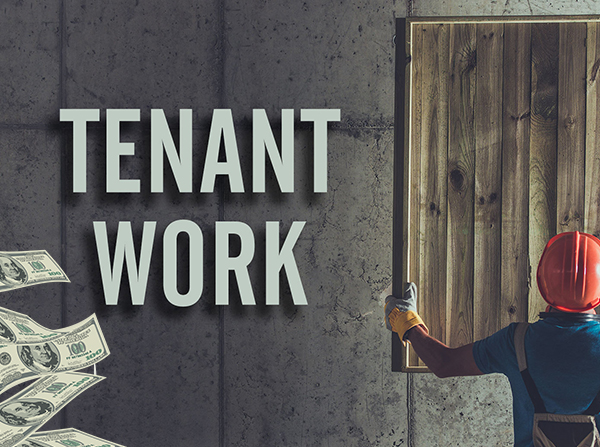 Webinar | SunRay Construction Solutions
Working for the Tenant? Follow These Steps to Lien and Get Paid - Webinar

Check if the work you are doing is a tenant improvement job and understand why that is important. Use the Notice of Commencement to get owner information and compare it to property records.