Boo! The Scariest Contract Term That’s in Your Contracts (and You Don’t Even Know It) - Webinar

Learn about the scariest term in your contract as a subcontractor, what an Addendum to Contract is, and how not to get stuck between a general contractor’s agreement and a supplier’s terms.

This blog comes from a webinar that was presented by SunRay Construction Solutions and Alex Barthet. Alex is a board-certified construction lawyer who serves clients in Florida. In this blog we will discuss the scariest contract term that is in your contracts that you probably don not know about!

On the agenda for discussion are the following:

What to do about it

Bonus – one other dangerous provision

There can be scary terms in your contract for a number of reasons.

1. The contracts can be very one-sided

2. Most subcontractors usually finance the project

If they cannot manage the risk properly, most subcontractors usually end up financing the project. Now by no means are the subcontractors the only people who have to bear a lot of risk on a construction project. General contractors do too, and owners have a lot of bargaining power, especially now.

3. Do not give up, try to make changes over time

Most importantly, if it does not feel right, and the contract terms plus the relationship, plus the finances on the job do not add up, you are better off walking away from a job that you think is not going to end well. This is better than taking on a job with one-sided contract terms that may actually risk the finances of your business.

Sometimes there will be a contract with 50, 100 or even 150 pages. The contractor or developer who is on one side of the contract may really think this job is important, that they really want it, and that it will set them apart from their competition. So, only make the absolute minimum amount of changes.

And if there is one provision in a contract that you should make sure you change, it is the obligation to work even if you are not paid. Now this provision exists in some prime contracts, meaning that an owner can put a provision like this in their contract with the prime contractor. This provision also exists in almost every subcontract, meaning that most general contractors are going to demand that their subcontractor continue working even if they have not been paid.

This does not happen as much with suppliers, since their credit application typically says that if they are not paid, they can stop extending credit and they can stop delivering.

So be aware that this condition could exist in many different places. Below is a sample of what this provision looks like, and it has been taken from a general contractor’s contract:

Subcontractor shall not be entitled to stop the work on account of a Contractor’s Default, including nonpayment, but shall proceed with the dispute resolution procedures in this Agreement.

This provision means that if you as the subcontractor on this project are not getting paid, you have to keep working. You have to keep paying for materials and labor. If you believe that the nonpayment is inappropriate, you have to proceed with the dispute resolution procedures in the agreement which could include:

a. A mediation where you have to meet with the other parties,

b. It may include arbitration, which is like a private court, which you will have to pay for and takes many months, or

c. Litigation, which is where you take the contractor to court.

They technically could not have held back money that they had been paid, because they have not been paid themselves. So a provision like this, to a subcontractor, and as a general contractor is very dangerous because it could put you out of business. Because if you cannot continue to fund the job, you will technically be in breach.

One more layer of concern on top of this is if you are a subcontractor with a provision like this in your contract, and you also issued a Payment and Performance Bond to the contractor, then not only do you have a risk on the job if you are not getting paid, but the contractor may say that you are in breach of the contract.

The contractor will say that they will make a claim on your Performance Bond because you are not continuing to do work even if you have not been paid. That is not a breach on their part. Your bonding company is going to have to come and take over, and they are going to come after you, under your general agreement of indemnity with the bonding company.

So know that this is a very precarious position to find yourself in.

Know more: I've Received a Claim on my Payment or Performance Bond! Now What?

What to Do About It

Let us take a step back and talk about how to make a change to a contract that is handed to you. If you decide to make changes to a contract, you can do so through one of two ways.

1. Mark up the contract by hand or create an addendum

The first way is, you could mark it up by hand or on the computer. For example, if you do not like three sentences, you could scrap them, initial next to them, or add another sentence.

Nowadays, more and more contracts are being exchanged through electronic means, including through documentation service companies. But they almost completely prevent you from making changes. And that quite frankly, in addition to making it easier to manage the contract, is another reason why contracts are being exchanged in that way. Because it prevents you from making changes.

The second way is by making an addendum, which is better than marking it by hand. You can do this by opening a blank sheet in Word. At the top, title is “Addendum,” and add the following line:

This Addendum shall modify and supersede any and all provisions contained in the Agreement, and all exhibits referenced therein, between Contractor and Subcontractor for the Project.

In that last line, if this is an addendum to contract between an owner and a contractor, you will write that it is between the owner and contractor.

Now in this addendum, you will write all of the changes that you want to make. So if you want to remove sentences, change them, or add new provisions, you will just list them all here.

3. Have it signed by all parties

If you were to use DocuSign, the way it would work would be for you to get the DocuSign link. You would then meet with or talk to the other party in the contract and come to an agreement on the changes you want via a proposed addendum to contract. Then when they send you the contract back via DocuSign, it is going to be the addendum and the contract documents.

4. Add a provision in the addendum to stop work

Now what can you add to deal with a provision that forces you to keep working? What you want to do then, is add a provision in the addendum that gives you the right to stop work. Below is an example of such a provision:

Subcontractor may slow or suspend work if any payment requests have not been paid in full within thirty calendar days from submission.

So, this gives you the right to slow or stop work if you have not been paid. Now the contractor or owner may not agree to the 30 days, maybe they want 40, 60, or 90 days. The important thing is that it is not never. There should be some reasonable end point at which if you are not paid, you get to stop work.

5. Be wary of “approved pay requests"

The other thing you need to be careful about when you make a change is when there is an “approved pay request.” For example, if the other side says that you have submitted a $100,000 pay request and they are approving $5,000, that does not help you. Because now you have expended the money and are only getting a small portion of it to keep going. So, you need to be careful about this.

There may be some negotiations around what this provision looks like. But the important thing is that you have some way to stop work. It does not prevent the pay-when-paid which is still in effect. So, if the owner has not paid the contractor, and the contractor has not paid you, that is not a breach of agreement. However, if you have not been paid what you have been requesting, then you get to slow or stop work.

One Other Dangerous Provision

There are other provisions in contracts that are worth changing. Number one is adding the right to stop work if you are not getting paid. Number two is notice. Having the right to be notified of issues and an opportunity to cure those issues goes a long way to solve problems.

Below is a sample provision from a contract:

Now this a notice, but it is a one calendar day notice. You may get this on a Friday afternoon on the long weekend, and now you have only one calendar day to solve this problem. Realistically, you cannot solve any problem in just one day.

So, another way to deal with this is, you want to be able to add more time. Below is another provision to add to the addendum:

“Contractor shall provide Subcontractor ten calendar days detailed written notice to cure any performance issue or delay or claim or before any payments are delayed or held back or any amounts are charged to Subcontractor.”

This provision slows everything down. It gives you, as a subcontractor, time to fix any problems before the contractor can back charge you, make a claim for a delay, supplement your work force, or back any payment. Again, this would also apply for a contractor dealing with an owner.

So, going back again, the number one thing you should change in a contract is to add the right to stop work if you are not paid. Number two is to add the opportunity for you to fix problems with notice.

The new SunRay website has a Learning Center which contains a treasure trove of detailed webinars and blogs where you can learn more about how to protect your lien rights and the important documents that you should file.

You also have access to information about important deadlines for contractors, subcontractors and suppliers 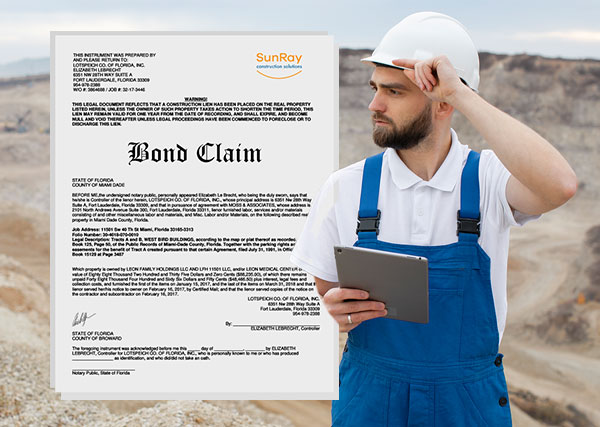 You sent a bond claim/Notice of Nonpayment, now you should know how to get paid! Understand whose payment bond you can make a claim on, if you need a proof of claim, and how to file suit. 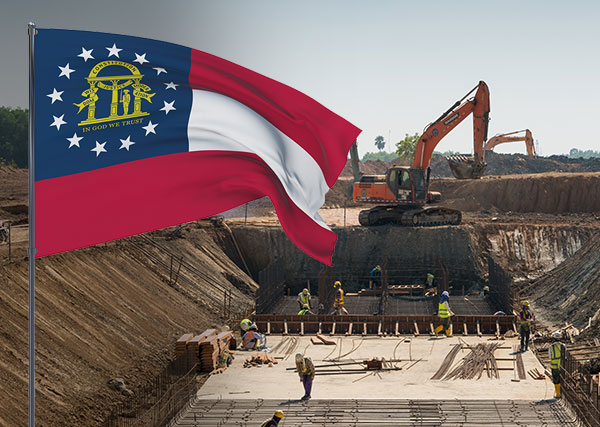 An overview of Georgia’s lien law changes in 2020, whether lien waivers no longer waive contract rights, and the new notice requirements to send to a general contractor. 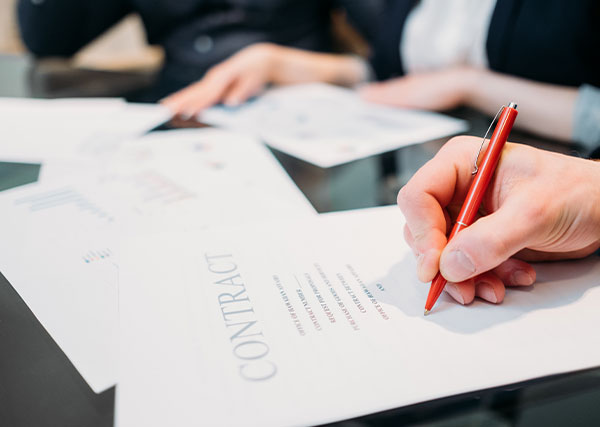 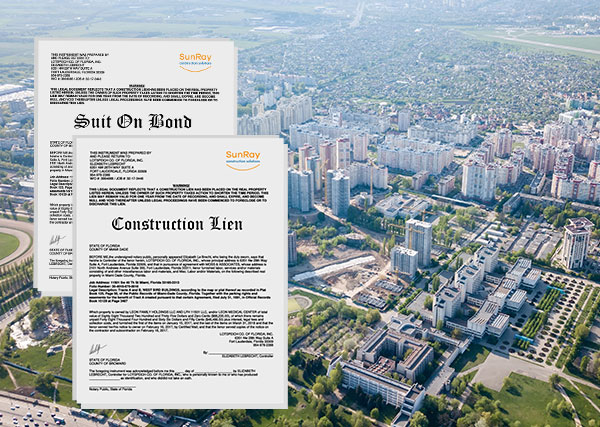